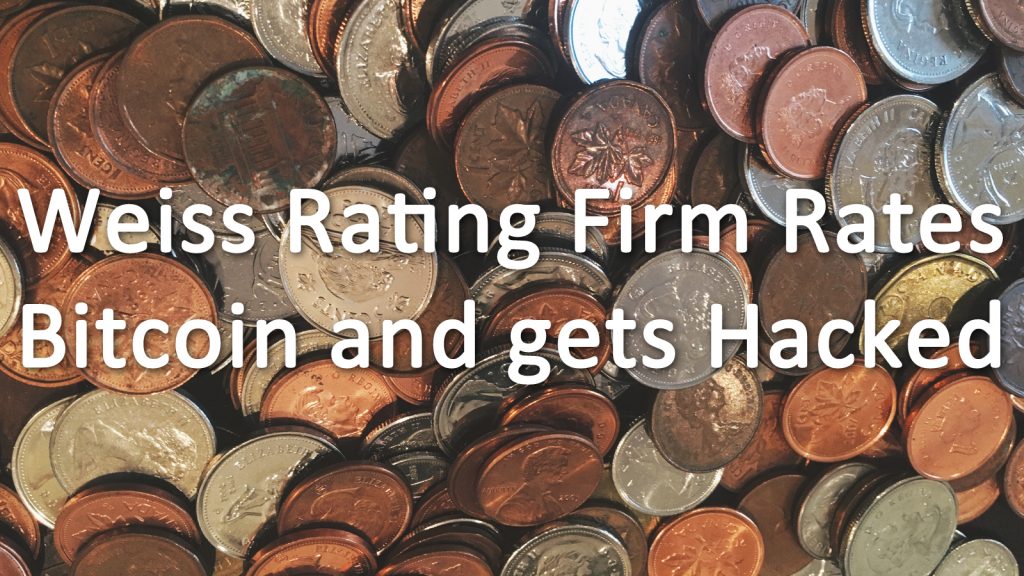 Weiss Ratings decided to rate crypto currencies today, which ended up backfiring on them spectacularly. Weiss Ratings gave Bitcoin a “fair C+ due to the high transaction costs, and network bottlenecks causing lengthy delays.” They also rated Ethereum, giving it a solid “B, because it is more easily upgradable and and maintains a higher transaction speed.” Weiss Ratings went on to rate dozens of other crypto currencies, but none of them scored the “A” grade, and only two managed to even score a “B.” Those two crypto currencies were Ethereum and EOS, everything else scored a “C” or less. Weiss is a notoriously hard grader however, and they rarely hand out any kind of “A” grade regardless of what they’re looking at. This may be due to the fact that Weiss doesn’t accept compensation for their grades, so they have no incentive to lie about what they think of an investment option.

In a public statement Weiss noted that leading up the release of their ratings that “The staff was up late last night fending off attacks from Korea.” These attacks were DDoS attacks, which seek to overwhelm a website with traffic. These attacks usually use botnets to generate the critical mass of devices to swamp a website so badly that it goes down for several hours. DDoS attacks are simplistic in their approach, but they can become very complicated and destructive. According to Weiss the DDoS attack was successful and from there the attackers successfully penetrated their website and stole the data that Weiss was planning to release. They didn’t destroy all of it however, though they did start pushing out altered data through Weiss social media channels and other news sites. Weiss stated that they believed these attacks were due to the possible negative ratings that they might have given, and that investors were afraid how those ratings would affect them. Crypto currency exchanges have reported similar DDoS attacks against them, as well as a general increase in traffic in the wake of the attack against Weiss. Whether or not this increase in traffic is explicitly an attack, or just investors trying to bail out, is unclear.

Weiss reportedly uses four metrics to judge a crypto currencies. “Risk, Reward, Technology, Fundamental Aspects of Adoption and Security.” These are good criteria to make an assessment on, and using them it becomes clearer why Bitcoin scored lower then Ethereum. Bitcoin exchanges are hacked into and stolen from frequently, because it possesses the most value. If a hacker can make it into an exchange, and only has a limited amount of time to act, they’re going to take the most expensive coins they can lay their hands on. Even after several crashes, Bitcoin is the most valuable crypto currency by far. Bitcoins volatility would lose it points in the risk and reward categories, because it is risky and its reward is becoming increasingly harder to see. Technologically speaking Bitcoin is struggling with the transaction fees that are required to use it.