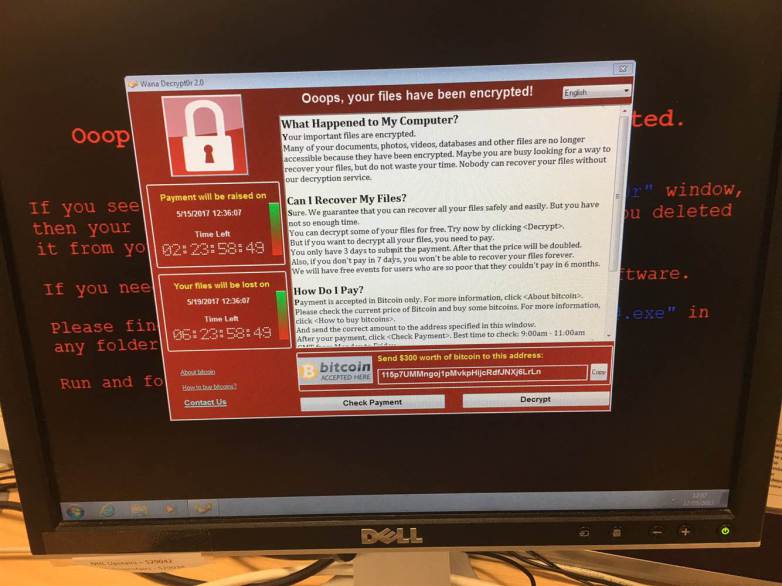 The deadline to pay the ransom demanded by the malware known as WannaCry is Friday 19 May. WannaCry is the ransomware cyber-attack that swept across Europe a week ago. Hackers used WannaCry to lock up Windows computers demanding a ransom $300 USD payable in Bitcoin to relinquish control of infected systems.

Ransomware is a type of malware that demands something, the ransom, in exchange for returning control or files back to their rightful owners. WannaCry is a ransomware program that was written from code stolen from the US National Security Agency (NSA). This ransomware only affected Microsoft Windows computers that had not been kept up to date. Microsoft had actually patched (updated) their Windows operating systems back in March 2017 in response to the NSA theft. Any fully up-to-date Windows computer was not affected by WannaCry.

However, over 200, 000 computers were not updated and were indeed locked up by the ransomware. Reports of infected computers began in the United Kingdom last Friday. The UK’s National Health System (NHS) reported that they were unable to access patient data. Many elective procedures and appointments had to be canceled as a result. The countries with the largest number of infected computers were Russia and China. China is notorious for pirated software and as a result, many copies of the MS Windows were unpatched because they were pirated.

All organizations, including governmental agencies, recommend against paying the ransom. There is no guarantee that the people behind the ransomware attack will actually release control of the computer. However, some desperate computer owners did pay the ransom.

About $90,000 in Bitcoin had already been deposited as ransom in the hacker’s account. It seemed that there was no planned strategy to handle delivery of the keys to those that paid.
It was also discovered that there were only four versions of the unlock keys making it easy for those affected to share them.

What to do if your computer is affected by WannaCry

The best thing you can do to protect your computer is make sure it has the latest version of Windows installed. If you are not sure if your Windows system is up-to-date, visit the Microsoft website to learn how to check and update your system. WannaCry does not affect smartphones or any computers running any operating system except MS Windows.

Initially the virus was slowed when white hat coders found a fix that caused WannaCry not to deploy. However, that was temporary and the malware began to spread again.

A complete wipe of a computer’s hard drive will remove WannaCry. However, that is a little more extreme than most users want. Microsoft has instructions on how to enable and disable Server Message Block (SMB) version 1 (SMBv1), SMB version 2 (SMBv2), and SMB version 3 (SMBv3) on the SMB client and server components.