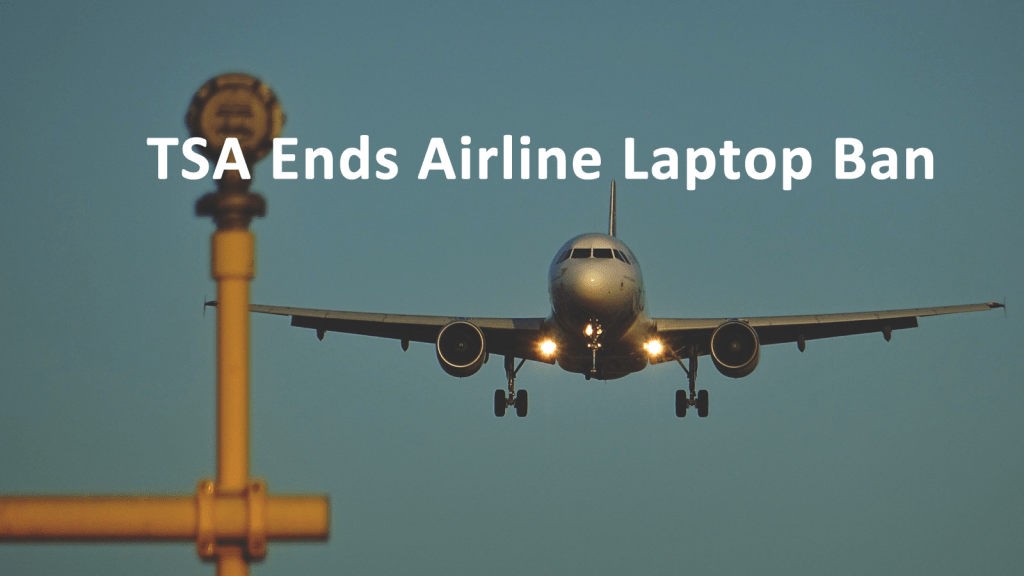 On Monday, the United States Transportation Security Administration (TSA) ended the airline regulation that prohibited carrying laptops and other electronic devices into an airliner’s cabin. The directive required that all personal electronic devices larger than a smart phone be checked in and stored in the cargo hold as baggage. The temporary ban applied to airliners headed to the United States from certain Muslim countries. In addition, it only applied to direct flights and not flights with layovers in non-affected countries.

In March TSA issued a directive based on intelligence information. The agency believes that terrorists latest tactics include hiding bombs in the cases of electronic devices disguised as batteries and other components. The notification gave nine airlines serving ten airports in the Middle East and Africa, eight countries in total, only 96 hours to comply with the ban.

Cellular phones and necessary medical devices were exempt. Laptops, tablets, cameras, DVD players, and handheld games were not allowed in the cabins of affected flights. The ban applied to everyone, regardless of citizenship.

The United Kingdom enacted a similar ban, but selected five more airlines and had only four in common with the US list. Because of the ban, a traveler could opt to take a layover in London and then fly to the US with laptop or whatever device in the cabin. Whereas, a direct flight via Emirates Airline would require the US bound traveler to stow the laptop as baggage.

Airlines and airports must increase security measures and comply with new regulations before allowing passengers to carry-on electronics. Initially, when the TSA first announced the ban, the new regulations were not clear leaving airlines questioning exactly what they had to do to allow passengers to use their electronics on bard again. According to the directive, the regulations included:

Airlines were freed from the restriction as they complied with the new TSA security requirements. Not all airports are free from the electronic device ban. King Khalid International Airport (RUH) in Riyad, Saudi Arabia has yet to be inspected for compliance.