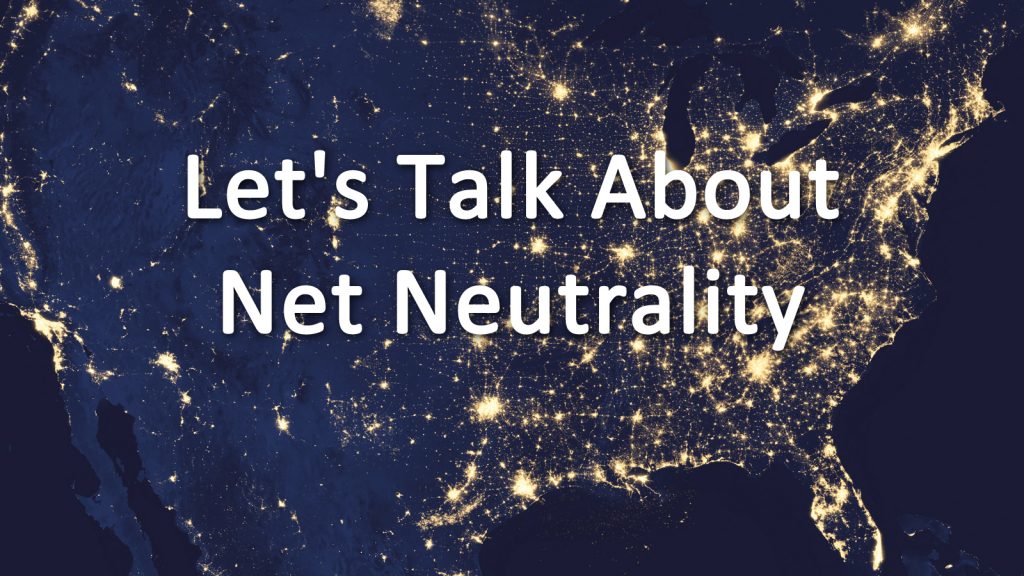 So, the FCC voted to repeal Net Neutrality. This has been covered by every major news organization, fake news organization and everything in-between. We’re not here to discuss the merits of keeping or getting rid of Net Neutrality, instead we’re going to look at an interesting bit of legal trivia that’s part of it. There are a few parts of it that everyone knows, the biggest one being that if Net Neutrality is repealed then ISPs will be able to throttle your internet speeds based on the content your browsing. This argument for Net Neutrality comes from a misrepresented part of the Net Neutrality legislation, that ISPs may not throttle content, applications or non-harmful devices. The full text is much more concerning from a privacy point of view:

Take a long look at that sentence, and try to figure where the privacy concern pops up. Here are some hints: The Patriot Act, Phone Tapping, Mass Surveillance and Data Collection. It’s the requirement that your ISP not slowdown what is referred to as “legal” or also “otherwise legal” content. That part of the sentence adds uncomfortable ramifications to the whole thing. Your ISP is allowed to slow/block illegal content but to do so means they need to know the content is illegal in the first place. Which means, if they feel like enforcing that part, they’ll be watching everything you do. Broadband and ISP providers already have some amount of responsibility when it comes to monitoring their users traffic, for a while Comcast was sending out letters notifying its customers that they were aware of people pirating media. Comcast never acted on these letters, because they’re not really required to as a private company. They can make the excuse that it costs too much money, or they don’t have the equipment to prove its one user performing the illegal act. As a federally regulated common carrier however, they have a strong legal requirement to act on these things. Instead of the FBI putting up movies on ThePirateBay with malware inside to track down illegal downloads, you’d have your ISP doing it instead or working with the police.

Do the Police Need a Search Warrant?

Currently police and other federal agencies are required have a search warrant to get at your internet history, but with this legislation in place they may no longer need that. After all, your ISP already has to know whether or not you’re doing something illegal. At the very least, the police would be able to take what the ISP has collected and use it as evidence for a judge to provide a search warrant. Laws that include open-ended statements like that are dangerous, they leave a lot open to interpretation. Trucks and other mass transport vehicles are common carriers, and they get stopped all the time by the police to be searched. There are roadside stations to weigh them, all to insure they’re not breaking some law in some state. Trucks are required to transport legal goods, and they have to be able to prove that they’re doing so. Regardless of the anything else Net Neutrality might provide, it has to be worded in a way that doesn’t open up private citizens’ data so easily.

An interesting note: The FCC has redirected the Net Neutrality page to the Restoring Internet Freedom page. Even if you type in the URL, you’ll get bounced to the RIF page. If you want to see the FCC’s archived page about Net Neutrality, you’ll need to use a Wayback machine.