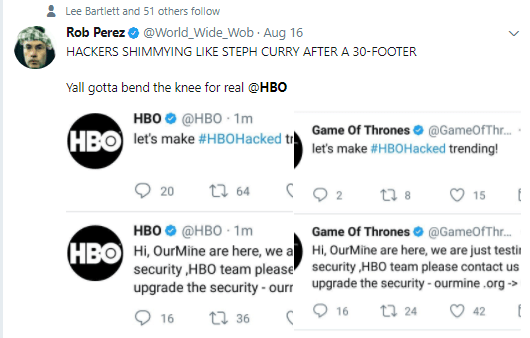 Cable and satellite television network HBO social media accounts were hacked. HBO’s Twitter account was hacked along with the Twitter accounts belonging to a few of their shows. The media giant is still dealing with the fallout of last week’s cyber security attack.

On July 31, hackers gained acquired almost 1.5 terabytes of data during a cyber attack. Afterward, hackers demanded a $6 million ransom for draft scripts in addition to emails and other data. The data hackers are not the same as those responsible for the social media hack.

Hacker group OurMine posted to HBO’s main Twitter account. The post was later taken down so HBO appears to have regained control. Copies of it still exist on Twitter. OurMine is also responsible for taking over social accounts of media accounts of Netflix, Marvel, Google and Facebook CEO Mark Zuckerberg.