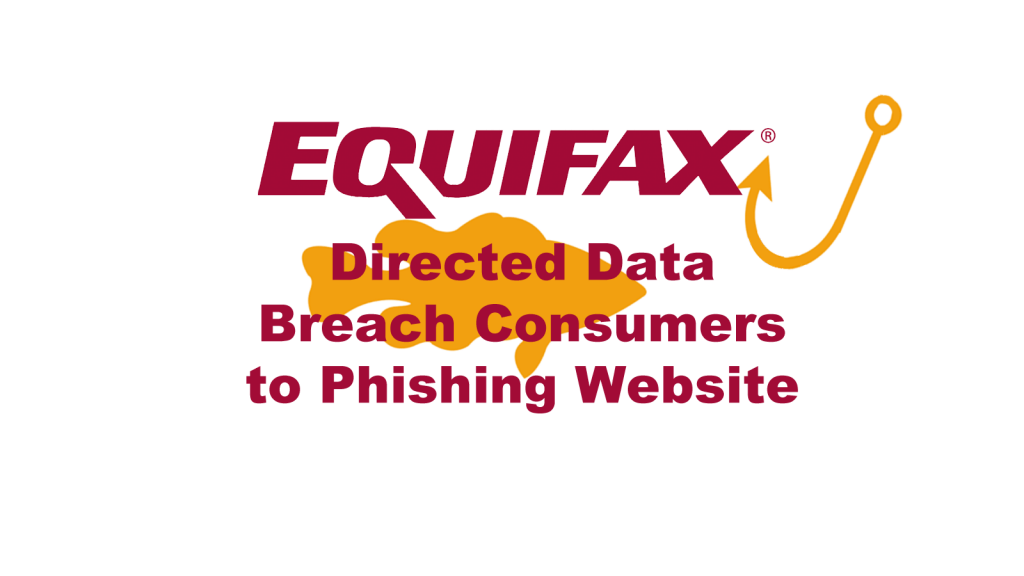 Equifax, the consumer credit reporting agency, directed some data breach consumers to a phishing website! The counterfeit website’s URL is securityequifax2017.com. It is an identical copy of the Equifax owned, legitimate website www.equifaxsecurity2017.com. The licit Equifax website offers complimentary identity theft protection in the wake of their massive data breach. The real and fake websites both ask for a consumer’s last name and the last six digits of their social security number. The real websites then informs users if their data has been compromised.

Equifax set up the dedicated website at https://www.equifaxsecurity2017.com to help consumers determine if they are one of the unlucky people affected by the data breach. However, tech gurus quickly demonstrated that the legit website does not consistently determine if an individual is compromised or not. Equifax is offering one year of its own credit protection service, TrustedID Premier, which includes three-Bureau credit monitoring of Equifax, Experian, and TransUnion credit reports for free.

Ownership of the sham website, which appears visually identical to the real version, was claimed by software engineer, Nick Sweeting. A quick check of the ICANN WHOIS database shows the URL is registered privately. He did it to demonstrate how fast and easy it is to set up a copy of a simple website. Fortunately, Mr. Sweeting states that he did not store any data collected by the phishing website, and has no intention to steal identities or hack data.

To make matters worse, Equifax customer support on Twitter actually tweeted the phishing version of the URL to some consumers who were seeking help. The screenshot below, from the phishing website’s owner, Nick Sweeting, shows Equifax’s Twitter customer service account directing consumers to the illegitimate support site. Sweeting tweeted a screenshot of eight different tweets from Equifax customer service directing consumers to his phishing site. 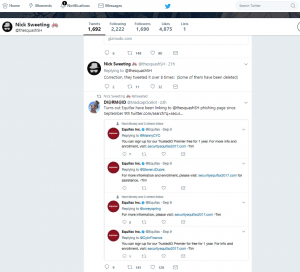 Critics of the legit version of the website criticized Equifax for not using their own corporate domain name Equifax.com as a portal for consumers. Using a new, longer, and unfamiliar domain name adds confusion for already worried customers.

Equifax recently announced that personal information of 143 million US consumers was hacked from one of its web applications. The data breach occurred from mid-May 2017 until Equifax discovered the cyber security breach on July 29. However, the hack was not revealed to the public until the first week of September 2017 – six weeks after the hack was discovered.

Equifax states that the cyber security hack occurred through a vulnerability in the Apache Struts web application framework. Equifax patched the affected web application. The hackers behind the identity theft are still unidentified.