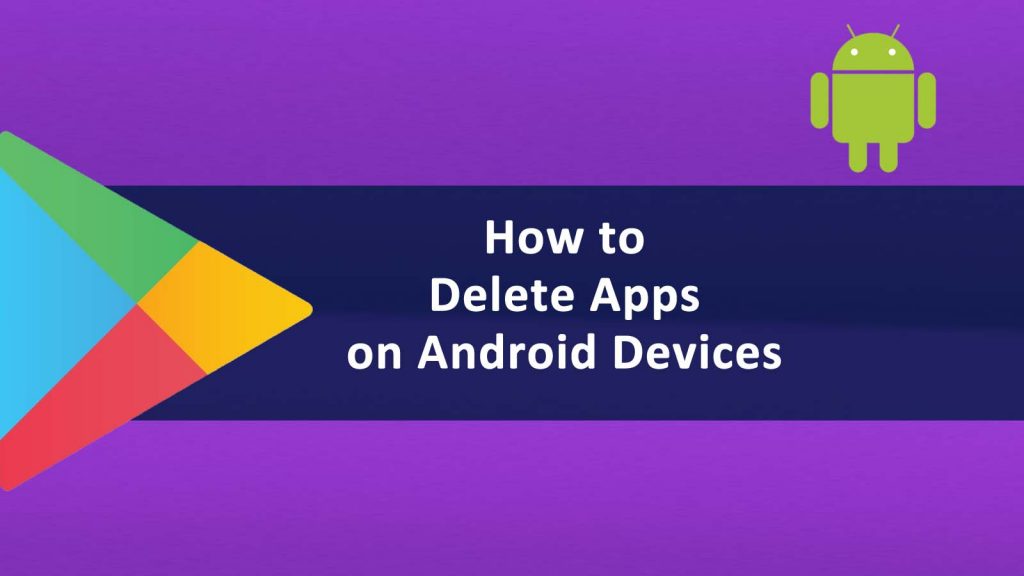 You’ll need to delete apps on your Android device if you find that you’re running out of operating system memory or storage space in your onboard storage or SIM card. It may that your suspect your phone is hacked becuase it makes strange sounds or your phone is too slow. You should also delete apps that are no longer used. Apps that are not updated with the latest version can present cyber security risks and leave a phone vulnerable to hacking or malware. Apps can use up a lot of storage space including memory cache and data. They use up system resources many of them run in the background using up wireless data. With so many free apps available on Android play store you may find that you simply don’t have enough room on your Android phone and need to delete apps.

Delete apps like digital media like music, magazines, books, films and television shows to save space and make room other things on your phone. Spotify, Netflix, and Hulu all consume space with large media file downloads saved for offline viewing. With the majority of Android Play store apps being free, it’s no winder that users need to delete apps to save space to remove unwanted or unused apps.

According to Statistica, at the end of December 2019, the number of Android Play Store apps was approximately 2.9 million apps. Google Play was launched as Android Market in the last quarter of 2008 and grew to one million apps by mid-2013. Candy Crush Saga, Facebook, Instagram, WhatsApp, WeChat, Snapchat, and Skype are some of the most popular apps.

Open the Google Play Store app on your phone, tablet, or laptop and go to the app page in question. Every app has a short description and the name of the developer. Check the current version of the app before deleting it.

How to Get the App Version Number on Android

Many apps are annoyingly preinstalled on Android phones and cannot be deleted. Many of the preinstalled apps are added by wireless carriers or device manufacturers and are known as bloatware. These are apps like Amazon, games, or Samsung Health, Verizon Voicemail that may or may not be unwanted. Nevertheless, they cannot be uninstalled unless the phone is rooted. But they can be disabled. Even if you cannot remove an app, you can clear the cached memory and disable them which forces the app to stop running.

If you are going to disable rather than delete an app, make sure it is not something that is essential for the operating system to run or something that you actually need. For example, if you are disabling location services, then realize that Google Maps won’t be able to give your directions.

How Do I Completely Remove an App from Android?

How to Completely Remove an App from Android
To delete apps that you don’t intend to reinstall you should clear the data and storage used by the app to free up more space. This ensures that space on your phone is freed up for other apps, videos, or images. If you’re just deleting the app temporarily then you can probably skip this step.

Repeat these steps for each when you delete apps.

How to Delete One App at A Time on Android

How to Delete One App at A Time on Android
To delete apps one at a time, you can either locate the app on the screen and delete it quickly by long pressing and choosing uninstall. But what you should really do first is clear the memory and data cache used by the app before uninstalling it. If you don’t do first, data remains on your phone and takes up valuable space preventing other apps from using it. Follow these steps above before permanently deleting any app.

From this screen, you can back up one screen and tap UNINSTALL.

Alternatively, to delete apps from any Screen

If the app cannot be deleted because it is bloatware, then tap disable

How to Delete Apps on Android

How to Delete Multiple Apps on Android
If you need to delete apps because you are resetting it with factory settings, cleaning up data because your phone was hacked, or maybe you’re trying to wipe your phone because you’re going to upgrade to a new phone or giving it to someone. It’s a lot faster to delete apps all at once.

When you have selected all the apps to delete, tap the green bar to remove.

How to Delete Apps on Samsung Smart TV

How to Delete Apps on Samsung Smart TV
Samsung Smart TVs have another version of the Android operating systme, but deleting apps is similar. Ininstalling an app is just as easy as on any other Android device.

Some apps won’t be able to be uninstalled to keep your smart TV operating properly. Samsung is also notorious for recording data and viewing habts of television users to sell to advertiers. Some apps cannot be deleted because of Terms of Service agreements with Samsung.

What to Do If Your Motor Skills Make it Difficult to Delete Apps
If you’re unable to perform the gestures needed to delete apps successfully, then users can make interface adjustments to change the time needed to long press icons. Phone touches have default settings from short hold (which is .5 seconds) to long hold which is (1.5 seconds.) Alternatively, users can set a custom duration by tapping custom and then holding down the screen as long as they feel comfortable. This will help users to delete apps and with all interactions on the phone.

How to Move an App on Your Android Home screen

Apps can be moved to and from your Android home screen or to other screens to keep them organized and easy to find. For example, I have my apps organized by productivity apps, social media, messaging apps, entertainment, and travel. That way when I’m in an airport I can easily find my airline app and get flight status updates.