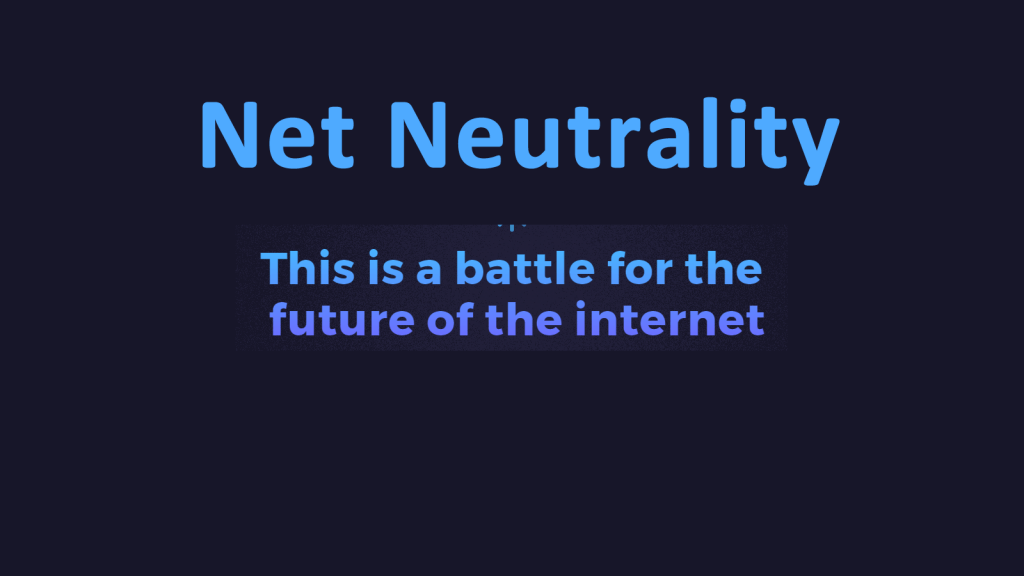 Today is first and possible annual Net Neutrality Day of Action. It is an online, grassroots activism movement to send a message to the Federal Communication Commission (FCC) to tell them to keep the Internet neutral and open to all forms of web traffic, without bias. The movement is an attempt to stop Federal Communications Commission chairman Ajit V. Pai from reversing net neutrality regulations.

Net Neutrality is the common name given to Title II Net Neutrality Rules established by the FCC in February 26, 2015. The rules apply to both wired and wireless internet connections grounded in Title II authority. What they mean are that all traffic carried by an Internet service providers must be served equally regardless of source or destination.

For example, let’s say Verizon is your internet service provider – how you access the internet at home or work. Netflix is a competitor of Verizon because they both sell movies on demand. Under current net neutrality laws Verizon is not allowed to serve Netflix movies (or any other service) slower than it delivers its own movies to your home TV. They are also not allowed to block Netflix (or any other service) altogether. Finally, Verizon cannot accept compensation to deliver any other traffic, like YouTube Red, faster than any other competitor on its network.

Reddit’s home page popped up an interstitial that read:

The internet’s less fun when your favorite sites load slowly, isn’t it? Whether you’re here for news, AMAs, or some good old-fashioned cats in business attire, the internet’s at its best when you—not internet service providers—decide what you see online. Today, u/kn0thing and I are calling on you to be the heroes we need. Please go to battleforthenet.com and tell the FCC that you support the open internet. 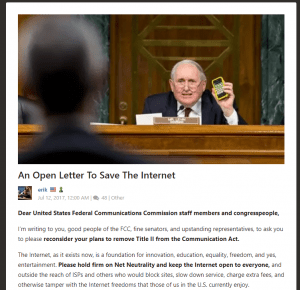 Sites like Chess.com posted an open letter to legislator [Figure 1] on their website. AT&T is on the list of companies supporting Net Neutrality Day although they have worked hard to have the regulations repealed. Opponents of net neutrality argue that ISPs should not be regulated as a utility. They also feel that the free market will solve this for us. Many also feel that all prices should not be equal and since competitors are using an ISPs connection that they have invested infrastructure dollars into, why shouldn’t they pay money to use it?

How you can support Net Neutrality: