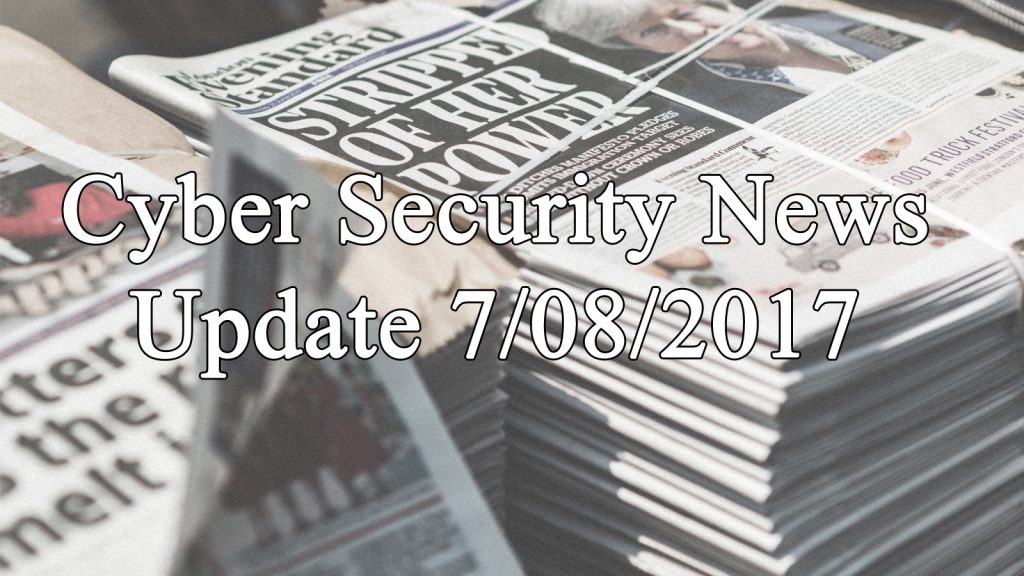 Today we’ll be taking a look at several interesting topics in the cyber security world. First up is the possibility that the United States will work with Russia on cybersecurity issues.

The Trump Administration has put forward the idea for a “bilateral group” that would work on protecting elections against electronic interference and hacking attempts. Democrat Adam Schiff said this idea would be the same as “working with North Korea on Nuclear Proliferation.” This group would stand in stark contrast to allegations from the United States that Russia interfered with the 2016 Presidential Elections. US law enforcement and intelligence agencies have all come forward stating that there is evidence that Russia based hackers did attempt to involve themselves in the election. This group came about as part of the discussions between President Trump and Vladimir Putin during their meeting at the G20 Summit. Other topics discussed include a cease-fire to try and stabilize Syria. Time will tell whether or not this bilateral group ever comes to pass, and if it does whether or not it will accomplish anything.
Source: Top Democrat: Working with Russia on cybersecurity is akin to ‘inviting the North Koreans’ to discuss nuclear proliferation

Google was fined $2.7 Billion dollars by an antitrust caste originating from the European Commission. This case has been ongoing since 2008, when antitrust officials started investigating Google’s services as they were brought into Europe. The specific service that got Google slapped with this massive fine? Their shopping algorithm. When you search for any product using Google, it places suggested products at the top of your page. The European Commission contended that this denied other merchants a fair shot at your money, and gave Google market dominance that stifled their competitors. The fine is the largest ever levied against a company, and is also more than twice as large as the original estimated $1.1 Billion. In addition to this fine, Google has 90 days to change the way it works in Europe or face more financial penalties. This penalty would be 5% of their umbrella company’s, Alphabet, daily operating income.
Source: Google Hit With $2.7 Billion Antitrust Fine

A California based Chinese news company was the target of a targeted phishing attack. The company, China Digital Times, reported that it received several phishing emails, which would have been used as vehicles to deliver trojans and other malware. China Digital Times was not the only company to be targeted by these attacks however, they were one of several Chinese websites targeted. The other victims include HK01, Mingjing News, Bowen Press and others. All of these websites are news sites that deal with Chinese news, and all were attacked in the same way. According to cyber security experts, these attacks are a repeat of attacks that targeted Tibetan radio stations and the Thai government. The attacks against the news websites involved phishing emails claiming to be sources of information, for upcoming stories or to contradict previously published ones. The emails would lead to a fake version of the website they had contacted, and would prompt the user to login. Doing so would give the information over to the attacking group, allowing them access to the websites. There are no reports that any of the websites were infected or had their security breached.
Source: THREAT ACTORS TARGET CHINESE LANGUAGE NEWS SITES