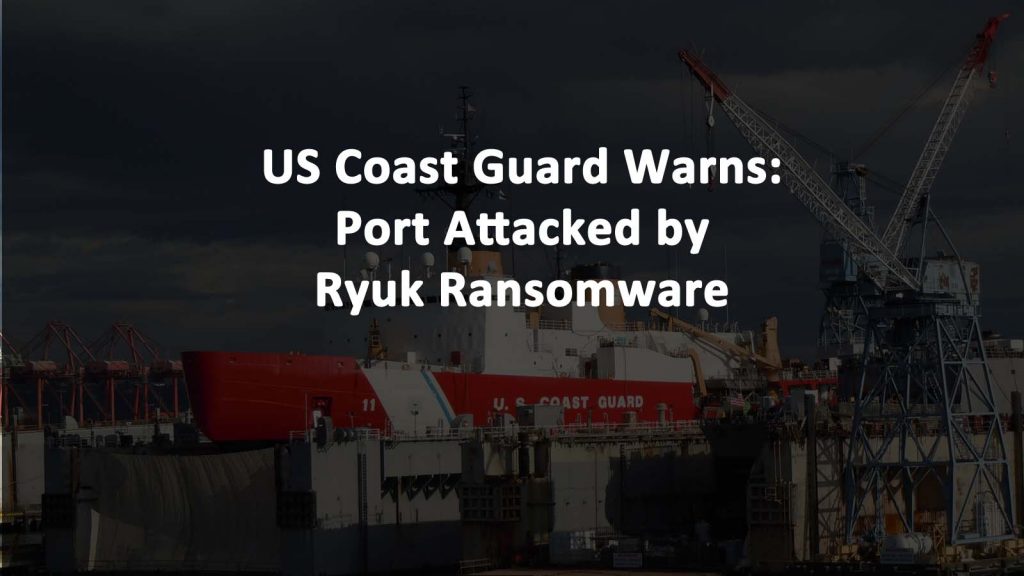 The United States Coast Guard reported a ransomware attack at a Maritime Transportation Security Act (MTSA) regulated facility. The malware attack caused the port to shut down for over 30 hours while it restored control of IT systems and equipment at the facility.

The Coast Guard bulletin did not specify the type of facility or its name. Since the bulletin mentions that ransomware attacked the cargo transfer industrial control systems it is assumed the facility is a port. The Coast Guard Bulletin mentioned that the attack affected the entire corporate network and its damage extended beyond the footprint of the facility, which is assumed to be a port authority.
Ports are known to be vulnerable to ransomware attacks, especially because data is often transferred on ships through a USB flash drive. In September 2018, were the ports of San Diego, US and Barcelona, Spain were both infected with Ryuk Ransomware within five days of each other.

The ransomware attack, believed to be Ryuk Ransomware, was sent to a maritime facility employee in an email phishing campaign. After the employee clicked on a link in the malicious email, Ryuk ransomware was able to infect and lock up the entire corporate IT network of at the facility.

What is Ryuk Ransomware?

Ryuk Ransomware first appeared in the middle of August 2018 in cyberattacks against major global organizations in the United States and Russia. Ryuk Ransomware is a data encryption Trojan which is not especially technically complex as far as malware is concerned. Ryuk operates similarly to HERMES ransomware which is attributed to a state-sponsored North Korean APT group known as Lazarus.

What differentiates Ryuk Ransomware from other malware if the high ransom demands to release control of infected files and systems. The ransom amount is generally proportional to the size of the infected organization. So far, Ryuk has netted about $4 million with an average ransom payment of $71,000 in Bitcoin. As of January 2019, the lowest ransom amount was 1.7 BTC and the highest was 99 BTC. There were 52 known transactions split across 37 BTC addresses.

Since January, 1,039 schools across the United States were infected by a ransomware attack, not all of them were Ryuk Ransomware though. Major cities were hit hard as well. Baltimore, Maryland was shut down for 36 days and three cities in Florida were completely paralyzed by ransomware attacks in 2019. Most recently, the City of New Orleans was infected with Ryuk Ransomware during the first half of December.

READ: Get a Free Credit Report for Military Service Members