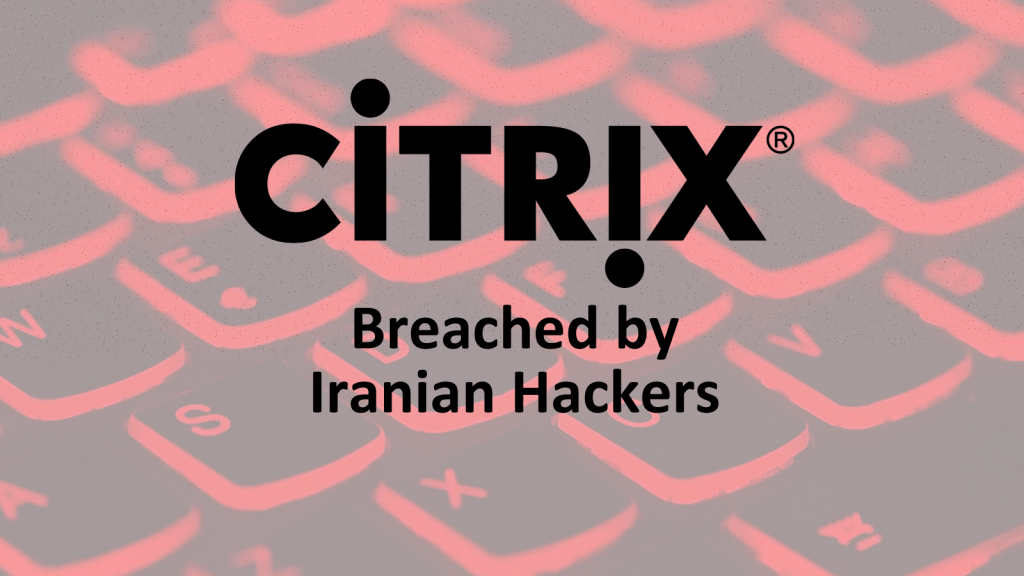 Citrix Systems Inc. disclosed an internal network hack carried out by the Iranian-backed Iridium hacking group. Six to ten terabytes of corporate data were stolen from Citrix servers. The security breach occurred in December 2018 and again on March 4, 2019 although it is believed that the hackers gained access to the Citrix network ten years ago, long before stealing any data. The Federal Bureau of Investigations (FBI) contacted Citrix on March 6, 2019 and advised Citrix that they believed the internal Citrix network had been breached.

Citrix Systems handles sensitive computer projects for White House communications, the U.S. military, the FBI, as well as thousands of private companies. Citrix also offers VPN services, allowing employees to access corporate networks from anywhere in the world. Citrix provides a centralized data center and business software to government agencies and private corporations worldwide. Their services allow employees to work remotely from their own desktops or mobile devices allowing users to access files and applications when the company operates on a VPN.

The hackers are believed to be from Iridium, a hacking group connected to the Iranian state. Iranian-backed Iridium is the same hacking group that hacked personal data of Australian lawmakers in February 2019 and attacked the British Parliament in 2017.

Why the Citrix Breach Matters

It looks like the hackers accessed and downloaded business documents. Citrix services are used by more than 400,000 organizations including most Fortune 500 companies. It is not known exactly which documents were taken. However, the hackers appeared to have focused on aerospace industry data, information from the FBI, NASA, and Saudi Arabia’s state-owned oil company. The intruders may have been lurking for a long time, too.

Iridium broke into Citrix Systems using a hacking vector known as password spraying. Password spraying is a cyber attack that attempts to gain access to a large number of account usernames by trying with a few commonly used passwords (like 12345 or mypassword.) One common password is used to attempt to log into multiple accounts rather than trying multiple passwords on one account. This is done to avoid a lockout due to too many login attempts in a short period of time. This password spraying “low-and-slow” tactic allows the hacker to remain undetected by avoiding account lockouts.

What is Citrix used for?

What Do I Do About the Citrix Hack?

Citrix Systems was notified about the data breach by the FBI. The company has not yet identified which files or Citrix services that were compromised. GoToMyPC users should change their passwords. When they reset the password, they should not use the same password again as it may have been compromised. The new passwords should be a strong password, not a common word.

GoToMyPC can enable two-factor authentication to strengthen the security on their accounts.