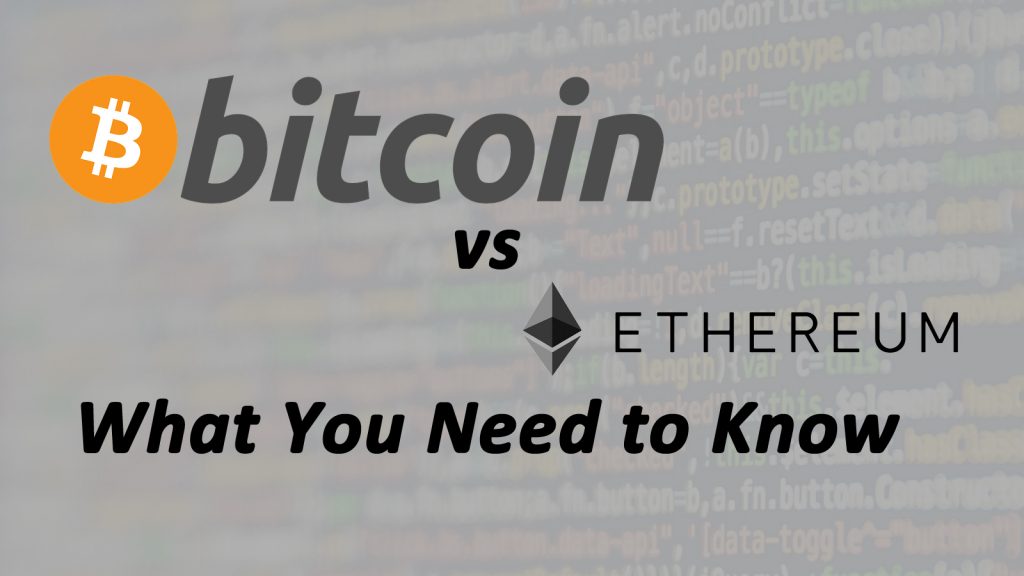 Bitcoin vs Ethereum – What You Need to Know

Unless you are living life completely disconnected from the internet, financial news and basically the rest of humanity, the you most likely have heard of Bitcoin. What’s the difference between Bitcoin and Ethereum? How are they the same? You may or may not have heard of Ethereum. Bitcoin and Ethereum are the most numerous of the cryptocurrencies. They have many similarities; however, they have a few key differences as well.

How are Bitcoin and Ethereum Similar?

That’s not the only commonality between the two. Neither Bitcoin or Ethereum Ethers are backed by any governmental organization. Both cryptocurrencies are created through a process called mining using blockchain technology.

Both use blockchain technology to produce more coin. A blockchain is a digital ledger of transaction data arranged in groups of data called blocks. They are related to one another a hashing function. When linked together blocks form a blockchain. Blockchain ledgers are decentralized by nature and that is why it is used for cryptocurrencies. The records inside this chain aren’t stored together in one location. They cannot be accessed by one person or organization because they are under the control of an unlimited number of people, called nodes. Because it is time-consuming and the computing power needed to mine cryptocurrencies is expensive, groups of miners together in pools to make the process more cost-effective. Pools of miners produce groups of transactions referred to as blocks. The blocks of transactions are broadcast to other nodes for validation and so the full nodes can add the new blocks to their ledgers. Network nodes validate earn a fee for their work and are paid in Bitcoin.

Both Bitcoin and Ethereum have limits